News
Concrete recycling with the Smart Liberator on the Urban Mine
Published on May, 15th 2020• A video in collaboration with the Province of North Holland about the Smart Liberator and the sustainable process used on our Urban Mine. Rick Rutte and Sven Hiskemuller van der Zijden explain in less than two minutes the impact they want and can make with this innovation!
Since November 1, Alef Schipper is no longer working for SmartCrusher. For questions and information you can contact us via Koos Schenk, koos@smartcrushers.com and by telephone via +31 6 222 63 487
How does the SmartLiberator work?
Updated May, 15th 2020• The first machine in the world that can 100% recycle concrete into raw materials to make new cement (Freement) and concrete. This movie shows an explanation in 4 simple steps!
Winner Circular Award Business 2019 - Category Construction
Published on February, 22nd 2019• In a competition with more than 120 registrations and extensive jury meetings, SmartCrusher has been chosen as -for the second time in a row- the winner in the Construction category.
The competition between Construction, Consumption Goods, Plastics, Biomass & Food and Manufacturing Industry has been won by Auping mattresses.

Information about the Circular Awards (in Dutch)

Sand Comparator - A comparison between various methods of breaking
Published on January, 23rd 2019• In this comparator new concrete sand, sand from the SmartCrusher and traditional breaker sand are compared. You can view and compare the various photos yourself. Grains with a size ranging from 0.5mm to 0.039mm can be compared.

Calculate your revenue when investing in SmartCrusher
Published on December, 3rd 2018• Do you want to contribute to a better environment with SmartCrusher and also make a good investment?

On the way to the best concrete - ABN-AMRO Insights
Published on December, 7th 2018• In the last newsletter of ABN-AMRO an article has been published about the Concrete Agreement. An agreement that, according to the Dutch Prime Minister Rutte, 'is an example for other sectors'. We can certainly be proud as a sector that we have put together this first paper step in the concrete. On the way to the next concrete steps.

It is for the ninth time that GroenLinks handed out the prize. The prize was awarded because of the Smart Liberator. A machine with which old concrete can be reused and which is still on the company premises in Amsterdam.

If this innovative technology is applied globally, this can result in a 9% CO2 reduction, according to the Rutte Groep. Three of these machines eventually arrive at Zaandam. They are powered by energy that comes from solar panels. The production process therefore also takes place in a sustainable manner.

At the moment, the Rutte Group is still located in Amsterdam Westpoort. The company has acquired a site in the Achtersluispolder. "Cross beacon will be the location for the Smart Liberator within one to two years", according to Cornelis Wals of the Rutte Groep. "You better!" GroenLinks party chairman Paul Laport joked, "otherwise you will have to hand in this Zaanse Sustainability Prize again."

See also ROTI for a (Dutch) article about this sustainability prize for Rutte Groep.

SmartCrusher wins the Real Estate Innovation Award 2018
Published on October, 10th 2018• In a competition with 700 start-ups from all over Europe Michel Baars from our partner New Horizon Urban Mining on behalf ofRutte Groep and SmartCrusher was allowed to pitch and won. Both the public and the professional jury made it very exciting during the EXPO REAL (Messe Munchen). 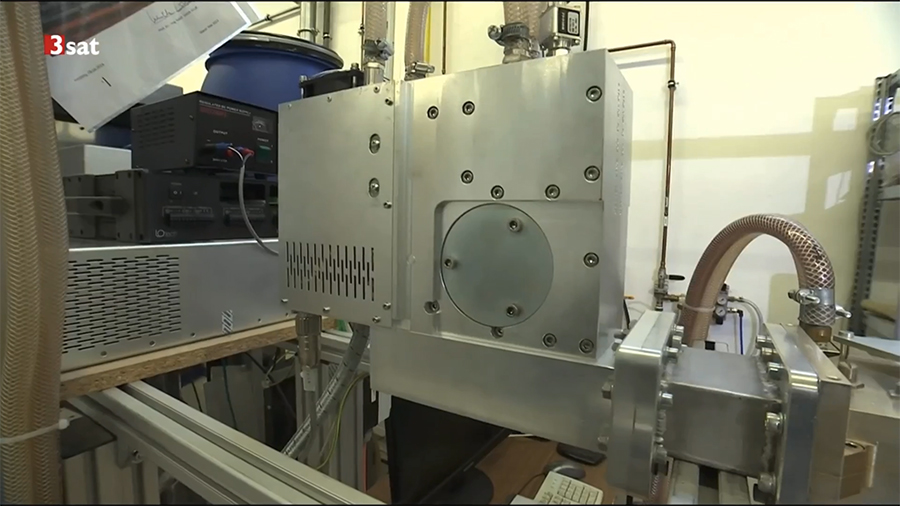 Microwave heating
Published on October, 5th 2018• Re-cementing pure cement hydrates from the SmartCrusher is mainly a matter of heating, and thus a matter of energy. Chemically speaking, hardly anything has changed over the years. From pure cement hydrates this can be done with 30% to 50% less energy compared to CaCO3 (Marl) and with at least 80 less in existing cement kilns.

In the case of fully electrical processing, for example in a number of Microwave furnaces, this can amount to almost free new cement! Several Microwave ovens then also form a Gridleveler to match supply and demand of wind and solar energy.

SmartCrusher in KIJK Magazine 2018 edition September
Published on September, 4th 2018• A section of technical masterpieces from Dutch companies in the Dutch KIJK Magazine. This month in NederTech the Smart Liberator.
SmartCrusher unfortunately not at the last 25 of the Green Challenge 2018
Published on August, 4th 2018• This year SmartCrusher competed for the prize money from the Green Challenge Lottery 2018 to fund further research. Unfortunately, we are not among the last 25 of the 845 participants. Fortunately, the last 25 are very good ideas where the money will certainly also be well spent. To participate in this challenge a video pitch of two minutes was required.
View the pitch of SmartCrusher.

SmartCrusher bv signs the agreement on concrete.
Published on August, 4th 2018• SmartCrusher bv was, as a participant of the very first hour, actively involved in both the table "CO2" and at the table "Recycling". Although SmartCrusher wanted to go further in the objectives, the result can be seen as a good start.

More (Dutch) information about the concrete agreement on https://mvonederland.nl/betonakkoord

As published earlier this SmartCrusher is now fully operational under the name of Smart Liberator.

SmartCrusher in article in the "Circular is Going Global Magazine"
Published on June, 21st 2018• In the week of June 11-14 more than 150 visitors from 20 countries came to the Netherlands to the Holland Circular Economy Week to meet, connect and exchange knowledge in the field of circular economy.

SmartCrusher was also present, in the HCH Magazine "Circular is Going Global Magazine" in the subject Construction an article about the SmartCrusher is published. Read the article.

There were many wonderful initiatives, so make sure to read the complete magazine "Circular is Going Global".

In recent weeks, many news items have been dedicated to the Smart Liberator.

SmartCrusher - Speaker - Towards a thriving industry in a net-zero emissions Europe
Published May 29th, 2018• How to align Europe’s resource and energy-intensive industries with the Paris Agreement?
The event brings together policy makers, industry representatives, NGOs and experts to discuss the potential and ways to reduce emissions from industry in Europe in order to guarantee its long-term competitiveness in a net zero carbon world. More information can be found on the website from the European Climate Foundation.

Koos Schenk is one of the speakers. See you at the event!

Within this collaborative project with various Belgian and Dutch partners will be examined, among other things, how the materials (especially the cement hydrate) released from the Smart Crushing of concrete can be further upgraded by processing it with microwaves to reuse in new concrete.

In the section publications the presentation Ambitious climate action with circular economy can be downloaded.

In the section publications the article "Claimed CO2 absorption concrete incorrect" can be downloaded.

In November 2016 the Dutch newspaper NRC published the article (in Dutch) Concrete disrupts the CO2 records.

A presentation held at the (Dutch) Sounding Board Meeting: Theme Circular Economy of the (Dutch) Sustainable Supplier Juni 21st, 2016. Presented among others for the anteagroup and Movaris.

Previous presented on Netwerk Betonketen (in Dutch) and earlier at VNConstructeurs (in Dutch). In the section publications the most recent version (2018) of the English presentation can be downloaded.

Strength development Smart Crusher sand and cement.
Published April 3, 2016• In November 2014 mortar tests have been carried out in cooperation with / at a concrete-products company regarding 0-2 mm material (sand and cement fractions), obtained by using the SmartCrushing technique from concrete aggregates of concrete paving stones. This 0-2 mm material (in a way SmartCrusher sand) has been compared with (pure) Norm sand 0-2mm.

In the section publications the report on the comparison can be found.
SmartCrusher in Booming Brabant from Omroep Brabant (Dutch television)
Published February 21, 2016• Booming Brabant weekly shows what is happening in the Brabant (Netherlands) economy. With emphasis on innovative and international developments. In the broadcast of February 18 the focus is on SmartCrusher.
Watch the (Dutch spoken) reportage here. 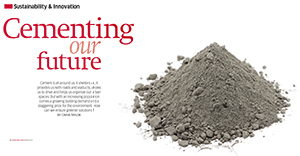 Published September 4, 2015• A new report and presentation on Circular Construction is now available under the section publications. Thanks to ABN-Amro and circle economy.

SmartCrusher bv and CyBe bv are discussing a cooperation based on “Cooperation without limitation”.
Published June 28, 2015• The underlying motivation for SmartCrusher bv is that, on its own, SmartCrusher bv can make the chain of “only” half of all the new concrete circular and, as a result, climate neutral (the prognosis for the quantity of new concrete required is roughly twice the projected quantity of concrete rubble being released). To accelerate closing the concrete cycle completely and reducing CO2 emissions in the process, a different way of concrete construction is required. This means that it must be possible in concrete construction to realise the same quality and quantity of constructions by using substantially less new concrete. As 3D concrete printing is in many respects one of the promising and innovative technologies to this end, SmartCrusher bv is keen to contribute to this. To learn more about 3D concrete printing, please visit www.cybe.eu.
SmartCrusher at Koploper Meeting on the 23rd of April.
Published March 6, 2015• SmartCrusher is honored to be asked by Pieter Parmentier ENF Foundation to participate in the annual Koploper (Leader) Meeting on April 23 in the Dom Church Utrecht.
Impression of Koploper Meeting 2015

Top 5 start-ups that leave their mark in 2015.
Published January 2, 2015• Look here for our listing on Duurzaambedrijfsleven.nl 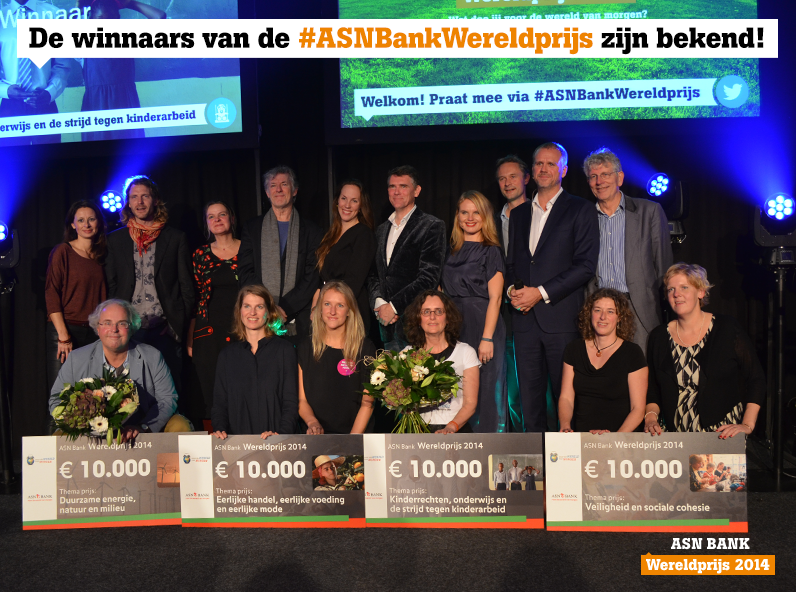